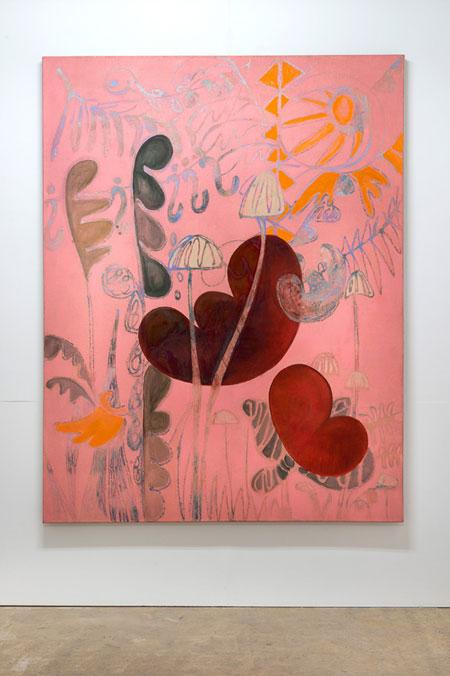 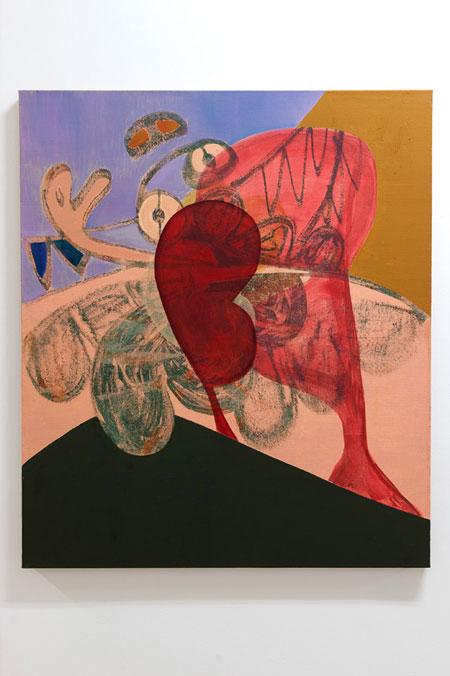 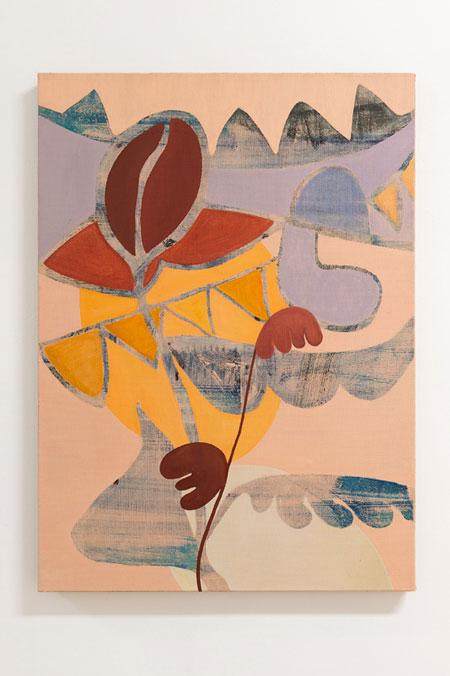 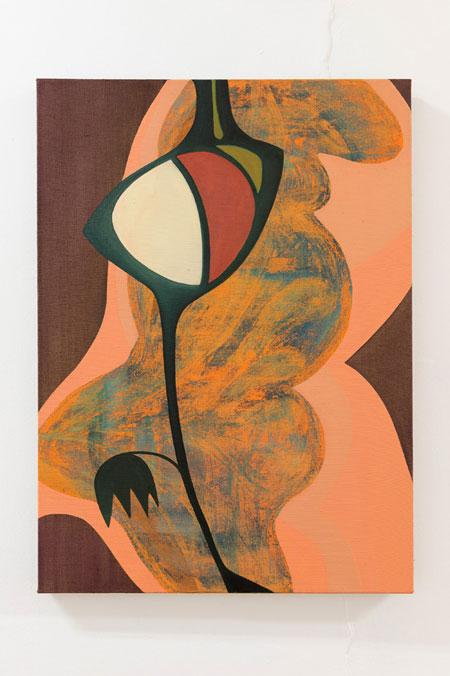 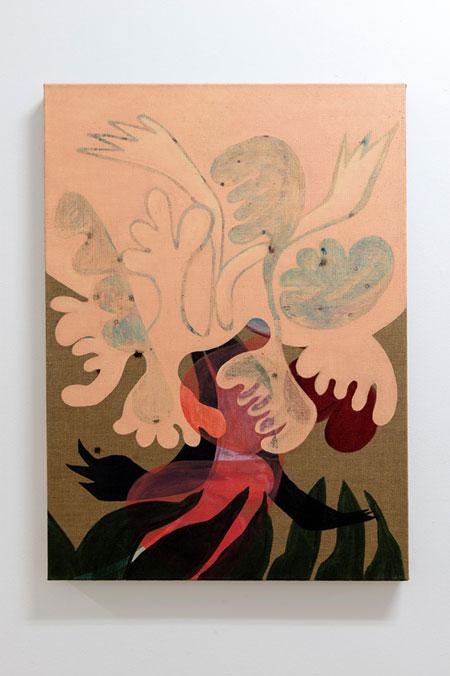 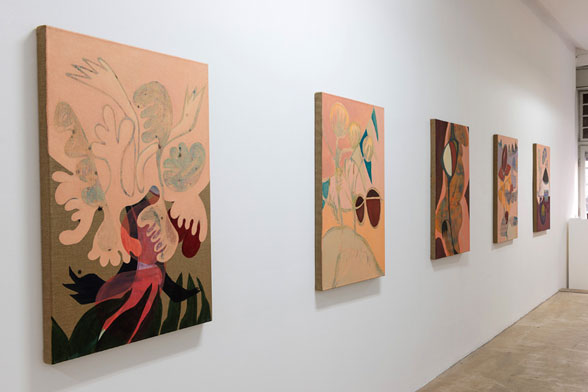 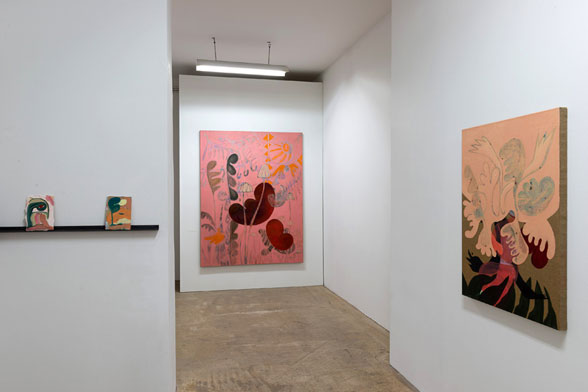 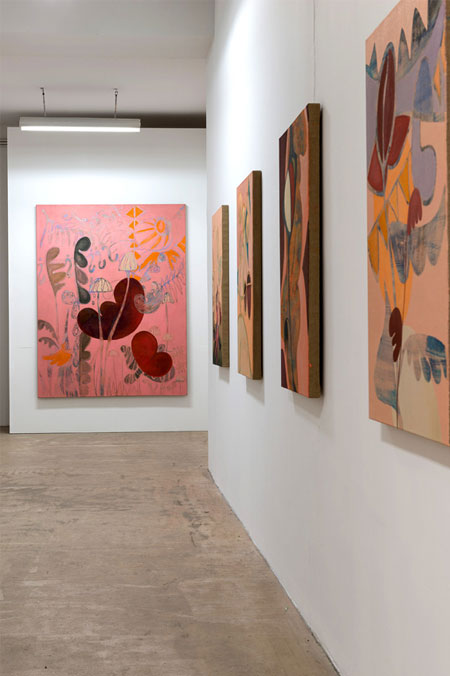 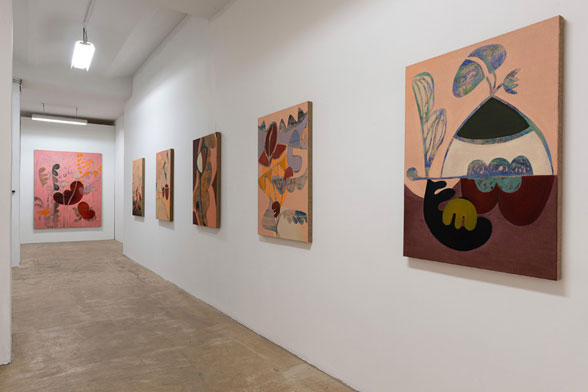 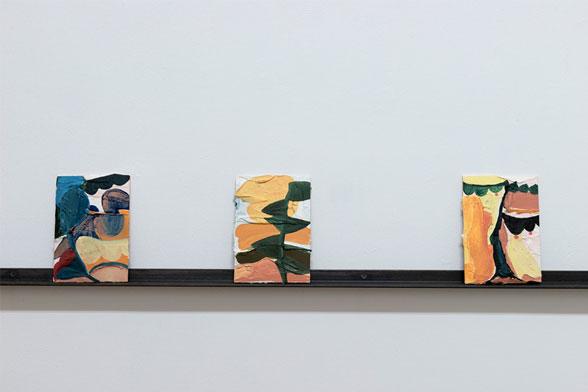 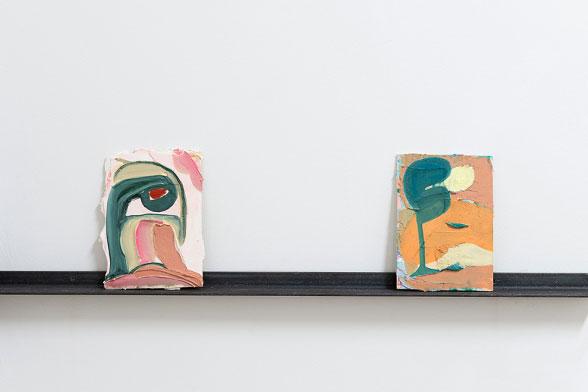 Ver Sacrum. Its strikes you, these pictures seem to have a will of their own morphing into the tranquility of a space-time vacuum where landscape, vegetation, and Homo sapiens converge. Dormant things awaken; motion is detected in the geological structures accrued in small relief works. Such autonomous studies are made with troweled plaster and thin washes of color accrued into sedimentations of a subdued palette. Expanded upon in numerous sized canvases with fine honed color, bundles and chords of bulbous shapes often suggest human torsos and bodily limbs. Lush solid plums, teal, and dark earthy greens counter the visible ground of fleshy Braque pinks. Stalks climb upwards in space like the stem of an exotic plant leaf, mushrooms poke through or beneath the overlapping imagery. Such forms of an imaginary tree of life are an astute reference to the early leaf drawings of Ellsworth Kelly, who unexpectedly informs her strange geometry.

Immersed in these topographies, it’s their quietness, as in the quietness of plants in natural environments, which belies the robust life in them. When considering the subtleties of the paintings you may have an urge to consume peyote in a shaman’s lair or lay low by the fireplace induced to a frequency of 8 to 13 hertz in the alpha wave. Art historical threads suggests first-generation abexpressionism (early Poussette-Dart), Arp’s curvilinear shapes, a nod to surrealist automatism (Baziotes), and the biomorphic freeform of Gorky.

They are not of the highflying 21st century technological age, nor do they comment on its numbing effect. Something has been lost for a longtime, though its still there in the amalgamated stream- past, present, future- in all of its psychological flux.

Ver Sacrum exclaimed the Viennese modernists, who at the dawn of a new century exuberantly used ornamentation to bring exceptional flourish to the details of the proportions found therein. And while nihilist posturing makes the performative inanities of 2019 go round and round, you would do well to take a mental stroll with these eclogues on transience. Their immaculate rhythm is of nature’s procedure, for nothing is as definitive as the eternal verity of life, art, and death.