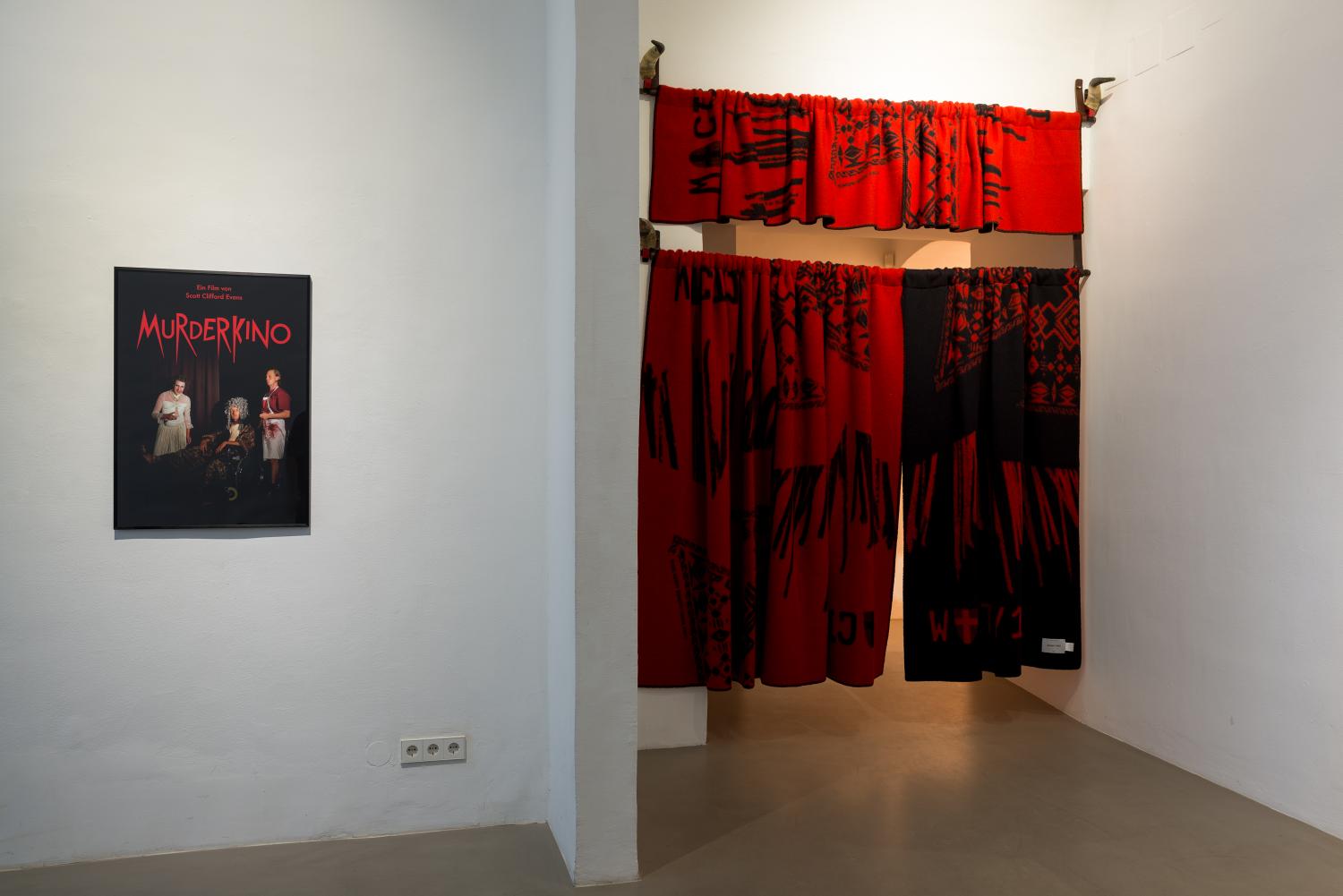 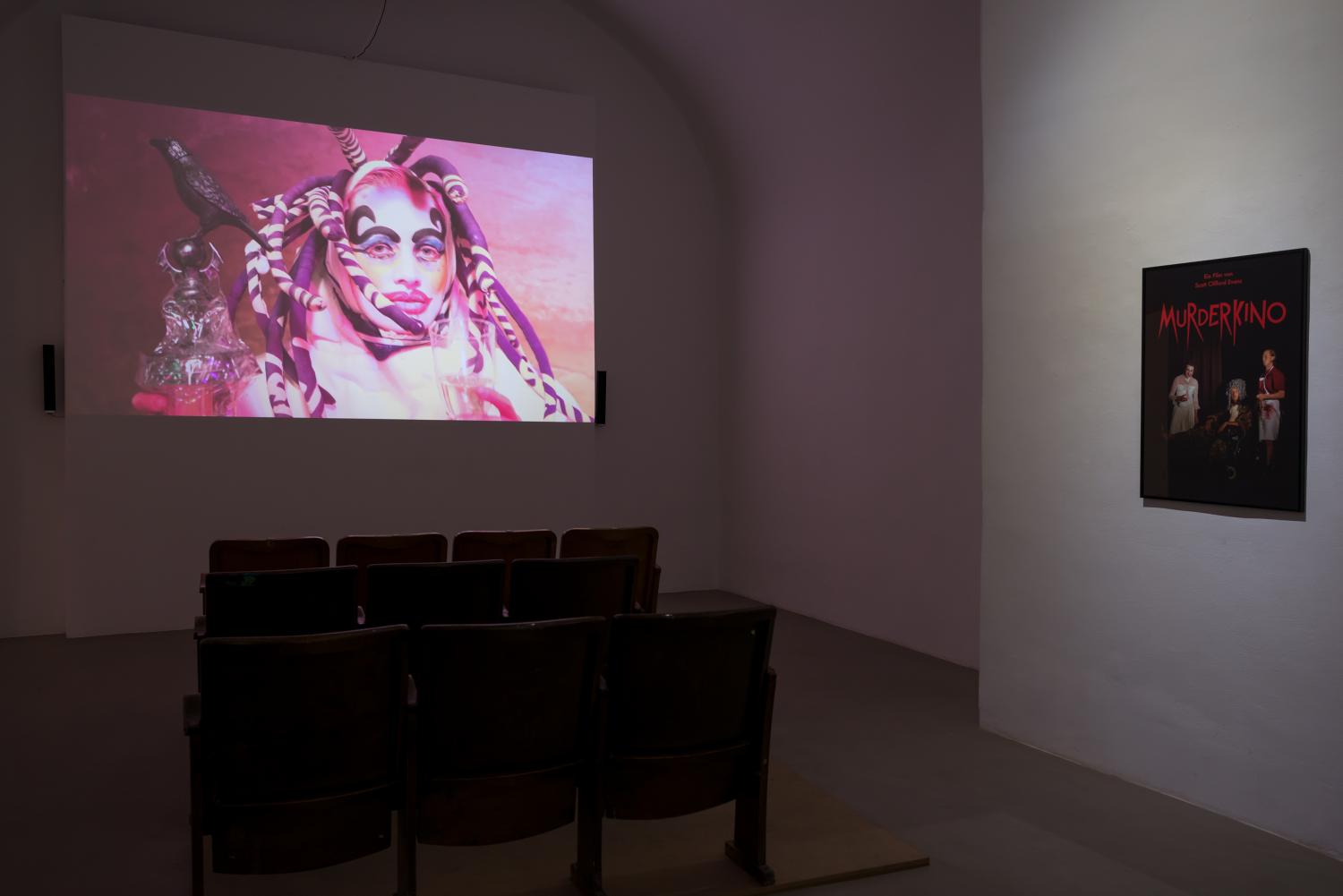 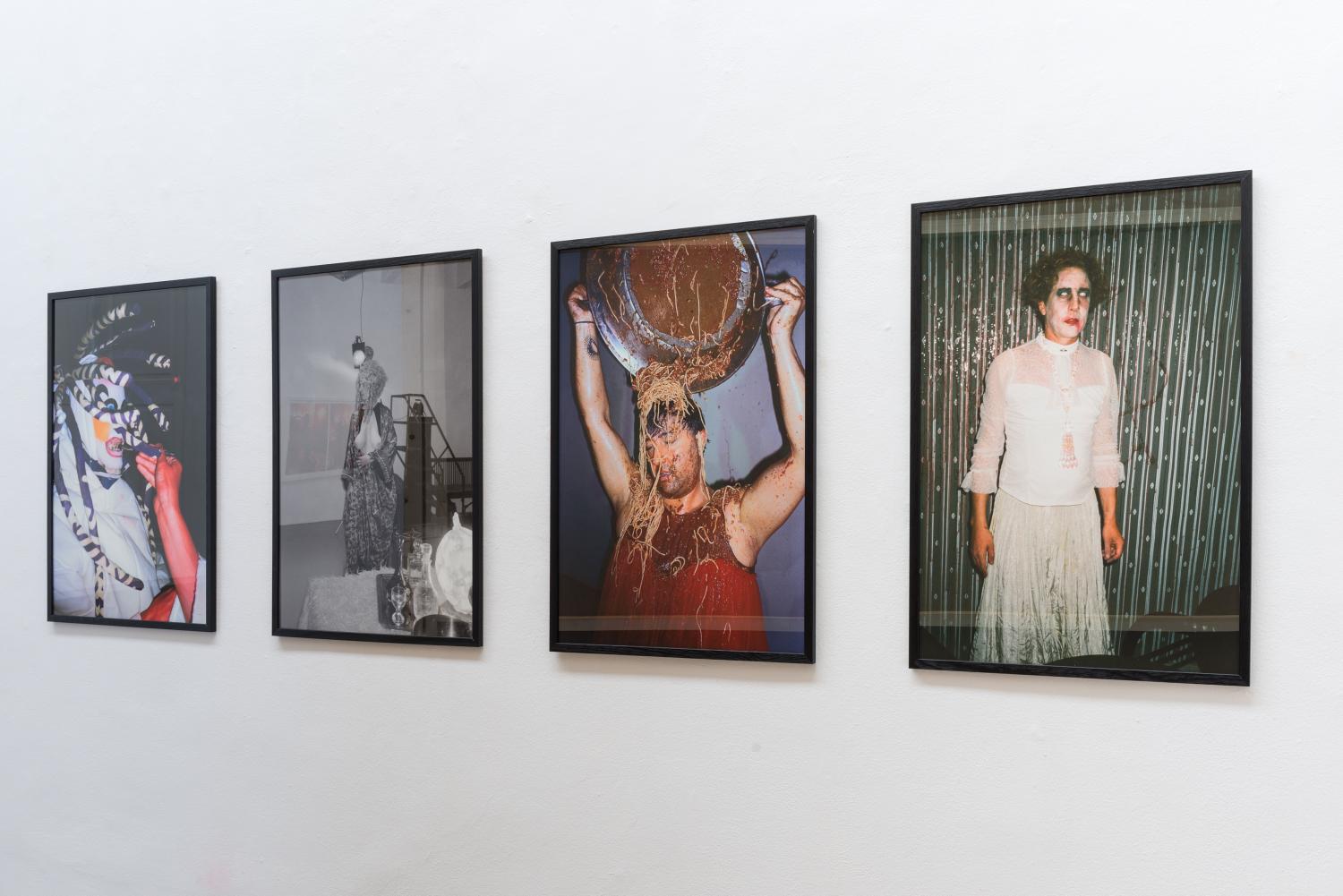 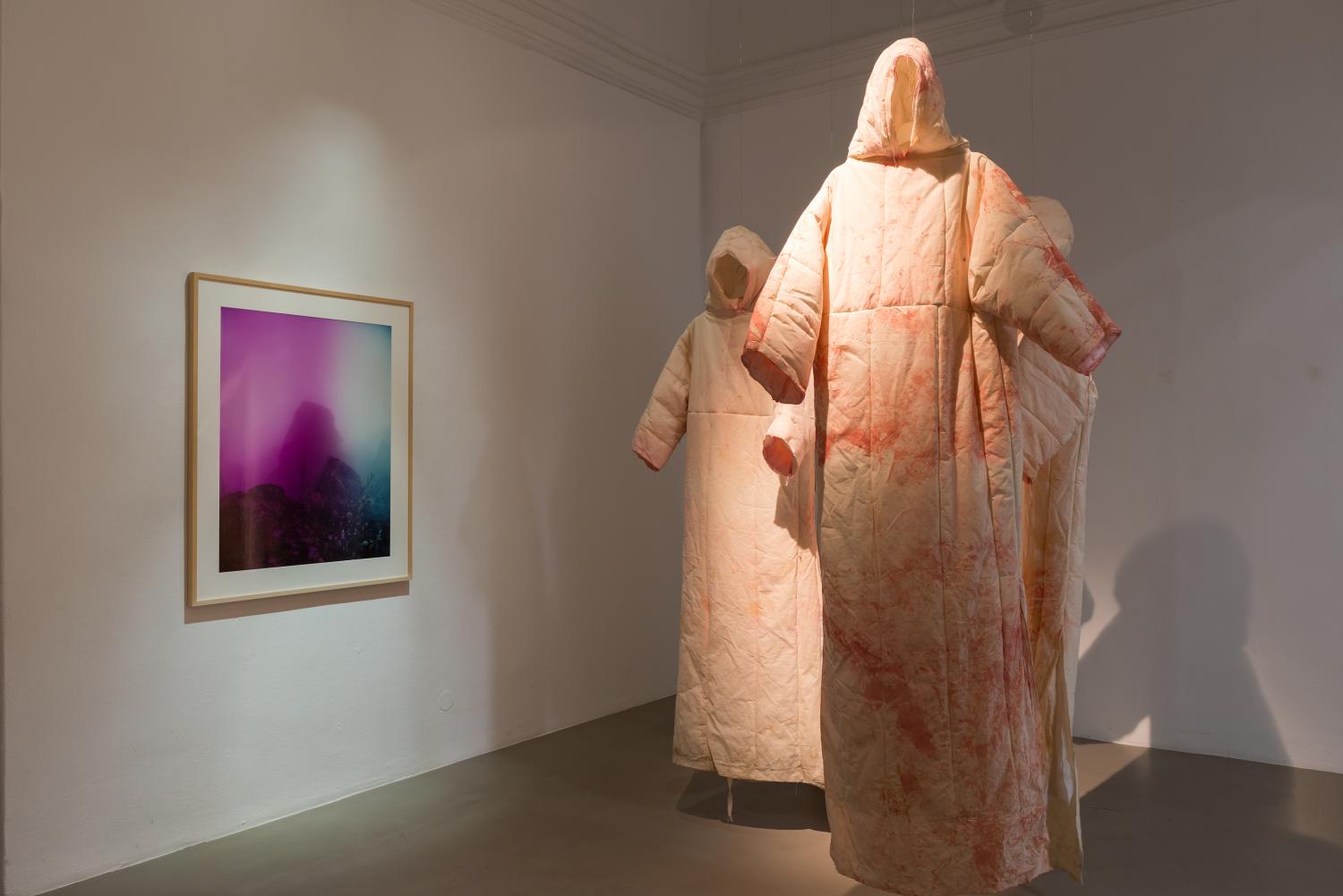 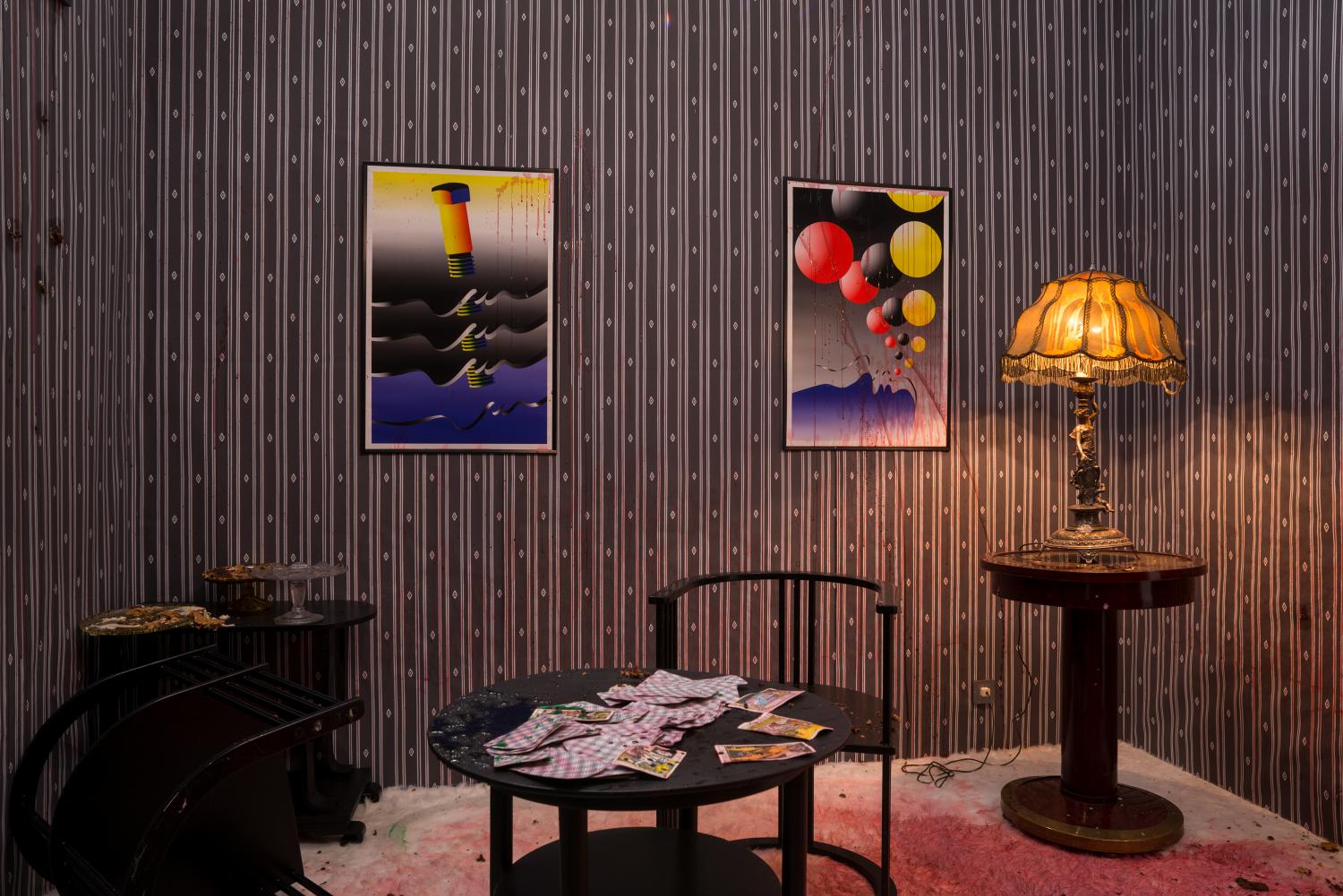 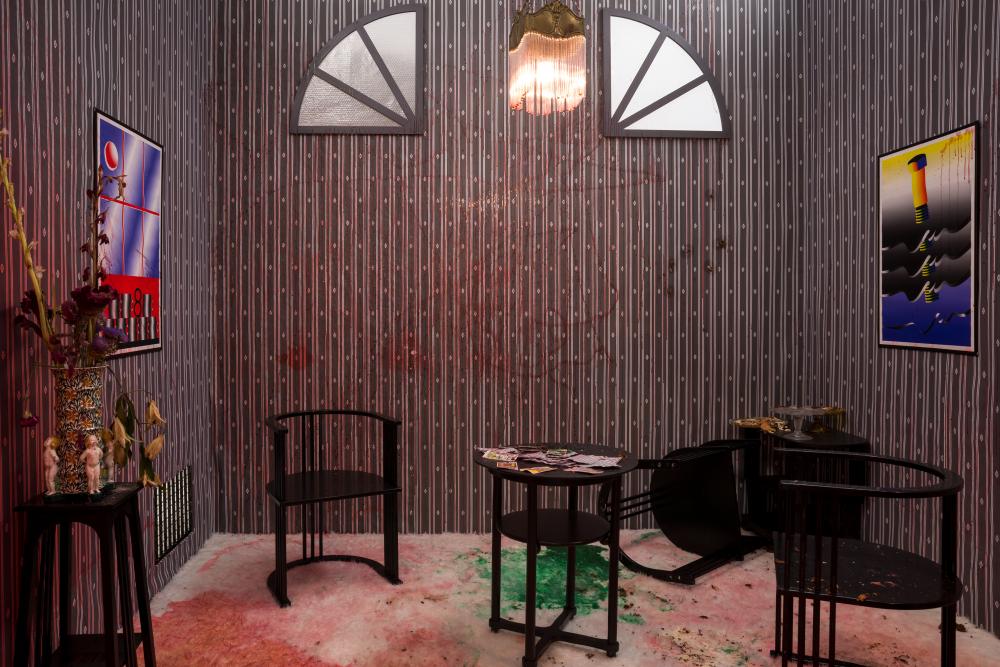 The episodic film Murderkino (2019–) is a work in progress by American artist Scott Clifford Evans (Layton, Utah, 1979). The project includes the media of film, installation, photography, and performance, as well as a remarkable production technique: it is based on literally no budget and the colossal commitment of numerous artists who bring together talent, know-how, and passion to create the ultimate brute-comic saturnalia. This grotesque trash-horror-splatter revue tells a Viennese morality of sin, excess and murder. Evans’ direction uses everything possible from professional methodacting to light gymnastics, from at least four camerapersons to Austria’s coolest musician and composer, from memorable set design by an artist’s hand to props from teenage dormitories and the Viennese treasury to shrill costumes, hair-raising wigs, body painting and insane masks. Already in the first four stages suspense, slapstick and a laconic narrative style are mobilized: Crawlspace (5 min), Deathtrap (16 min), Cannibal Dinner (12min), and Altar-Knife War-Witch (23min). The episodes take place at different locations – in artists’ studios and at the alternative art fair Parallel – and it’s planned to shoot at the Breitenseer Lichtspiele, one of the oldest cinemas in the world still in operation. A new episode will be filmed in August on the occasion of the festival curated by for the exhibition Murderkino in September 2020 in the Charim Galerie.

Scott Clifford Evans plays with the horror film genre in direction, screenplay and cinematography. Murderkino deals with the evolution of artistic trash: film as a Gesamtkunstwerk par grotesque. In addition, the artist negotiates the sensitivity of camp, as Susan Sontag explained it in her programmatic essay Notes on Camp in 1964. Through stylization, staging and secret codes, an attitude emerges that gives aesthetic form to our existence. “Camp is the consistent aesthetic experience of the world. It represents the victory of style over content, of the aesthetic over the moral, of irony over tragedy.”

If Orit Gat, in her impulse-giving essay Hybridity, traces the term hybridity in biology, mythology, ethnology, language and art, for Scott Clifford Evans the hybrid is, from the outset, the starting point of artistic production. In Murderkino he unleashes the entire repertoire of hybridity – blending, combination, mutation, cut’n’mix – as an unleashed punch line.

PDF
In collaboration with: